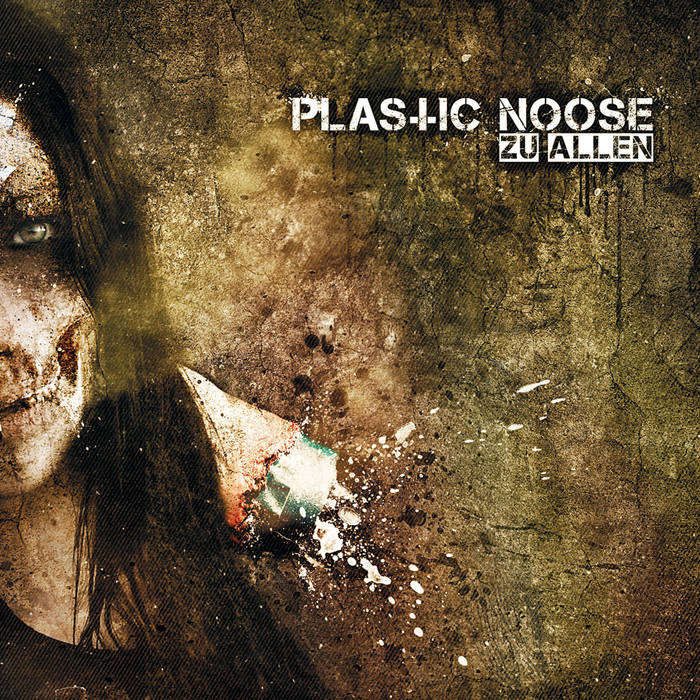 The debut outing from Scottish one-man-band Plastic Noose, is another one of those albums that has been floating around for a while that occasionally pops up and makes you take notice. A minimalistic style centred around big drum beats and distorted bass lines with , Plastic Noose has an old school kind of feel that balances industrial experimentation with extreme metal atmospheres...for fans of sinister, sleazy industrial this will be a rewarding listen.
- Intravenous Magazine

'Zu Allen' is a crafty produced debut of a promising up and coming artist, who has been clever enough to see a niche, where he could fill in his talent the best. Plastic Noose does not produce stuff for the faint-hearted audience expecting the smoothness of a Pop-Music related song structure. But if you have the will to take a trip into a dark and cold sounding Industrial/Coldwave-experience, you'll be able to discover these 7 pearls provided by this talented artist.
- Chain D.L.K 4.5/5

I'm not yet sure why I haven't heard of this one-man project from Scotland, but Plastic Noose, for all his tiny web presence, is on the very verge of something big indeed. At the end of April, Snow King (the artist behind this act) played live in Athens, on the self-labelled "One Night In Hell(as)" show, sharing a stage with acts as well known as Detroit Diesel, Terrolokaust, PreEmptive Strike 0.1, Nano Infect and Cygnosic. Quite how this happened is beyond me, but it's not for me to speculate on. This seven track debut album is a hybrid of Metal and Electro, which leaves me stunned, confused, and intrigued, due to both its unorthodox sound, and its sense of accomplishment. Opening with "Road To Perdition", our ears are met with a steady drum beat, a noisy distorted synth line, and some vocals very similar to Trent's on "Pretty Hate Machine". Lyrics like "I Feel your Body" echo a resemblance to "Closer", but unlike the aforementioned, this track is at no risk of being over quoted to death. It's really well written, the Guitar compositions (which is as frequent as the Electronics) are brilliantly executed. "Snow King" starts off with a breezy intro, and then a repeated, unsettling Piano chord, before launching into extremely low, distorted Drone-vocals reminiscent of Sunn0))), Khanate, etc. These turn into a spoken narrative, and the track could almost be better suited as an intro, if it wasn't for the façade that Plastic Noose exudes. This is a really dark, menacing and prophetic song - it's hard to listen to with headphones, and at 4:01 the guitar breaks in with a riff that makes me think a huge solo is going to happen. I'll let you work out if it does or not. The title track starts off with some Male harmonizing which sounds Gregorian in its nature, then Snow kick-starts his vocals with some typically Metal guitar work. This album, I must warn you, is strictly not for the conventional fan of Industrial/Metal. It showcases the best of both extreme ends of the genres, and makes for something riveting and truly different. "Before The Lord" brings us back to Ambient territory again, and like "Snow King" previously, relies on the use of Percussion and a very slow tempo to deliver a potent and confident sounding piece. If honest, my criticism is that for a 5 minute song, it's almost the same from the start, but we could loosely apply that to Ambient music as a whole, no? "Slutcentric" takes the awkwardness off of it, and just like the opener, re-opens the case for "Industrial" as a valid label for Plastic Noose. Vocally this is as far removed from NIN as can be, and Mr King is a bona fide example of an artist I both love and hate to write about - his confidence and palette of influences creates a strong release that's drawing about five scenes into it's web, but at the same time makes it very difficult to press down - what's he going for? What's the predominant style here? Yes, it's brilliantly written from surface to core, but which scene is this marketed to? The closing two tracks, one of which is nearly ten minutes long, carries down the same vein, and I have to deliver a final, honest assessment. If you're one of those that expects to dig a release in one listen, this is gonna be your bane. If you can play a disc several times, you'll be delighted with the effect this has with each additional spin. I'm not sure where Plastic Noose are going, but recent events can only lead to one direction - Up.
- Brutal Resonance

Plastic Noose is a synthesis of musical styles including industrial, metal, prog, classical & avant-garde. It was formed in Edinburgh, Scotland in 2009 by Alan Emslie.
All sales from this bandcamp page go directly to Plastic Noose to fund future sounds.
A huge thank you to all who have supported Plastic Noose and continue to do so. ... more

Bandcamp Daily  your guide to the world of Bandcamp